We may receive commissions for products purchased through links on this website. HomeofCozy is owned by Brooklyn Bedding, LLC. Learn more.

Have you ever wondered why a smaller sofa is simply referred to as a loveseat? In this post, we’ll explain what a loveseat is and how it got its lovely nickname. We’ll also talk about the history of loveseats and everything else you’d want to know about them.

If you’re interested in specifics about modern loveseats, you can check out our guide to the most comfortable loveseats out now. This post is more of an informational history of the furniture piece.

What is a loveseat?

A loveseat is essentially a two-seat chair. They are traditionally recognized as a two-seat couch, with or without armrests, where two people sit next to one another.

They can also be two-seater pieces of furniture where the seats are facing each other in an “S” shape so that both parties are facing one another.

Why it’s called a loveseat

The term “loveseat” has changed over time, but one of its earliest purposes was for courting couples who wanted to converse intimately, face-to-face. During this time, dating was very formal, and physical contact was extremely limited. These chairs provided likely the most intimate contact a couple would have.

When was the loveseat invented?

The earliest history of the loveseat can be traced back to the 17th century French Victorian Era. The loveseat then was used as an oversized chair, frequently by women in large, puffy dresses who could not fit in a standard chair.

However, as styles changed over time, in both fashion and in furniture, its use evolved. In the 19th century, courting couples who would need to sit face-to-face, within arms reach, to converse intimately during their courtship were the most frequent users of the loveseat across Europe.

By the 20th century, however, the loveseat became part of the American mid-century living room set. By then, it was meant simply to seat two people closely together. It was seen as an integral part of the living room and still is. Loveseats now often come in furniture sets with many colors, material and style options.

Regardless of how it was used and by whom, the loveseat remains an important fixture of the modern family living room. Since we’re proprietors of coziness recommendations, we deeply appreciate its existence at Home of Cozy.

The loveseat has gone by a few different names over the years. One of its first names was the tête-à-tête. This phrase now refers to private conversations between two people. The name harkens back to the 19th century use of the loveseat as a courting seat.

What’s the current purpose of a loveseat?

One thing we can be sure of is that the loveseat has evolved quite a bit over time. Today, loveseats can commonly be seen in furniture sets that come with a larger sofa to provide extra seating, along with coffee tables and end tables. Other uses involve space-saving in small spaces where a larger sofa may not fit.

It’s no longer the centerpiece of overly formal dating practices, but it is still a fun idea.

Differences between a loveseat and sofa

The main difference is between a loveseat and sofa lies in their size. Loveseats are basically a small sofa – specifically a two-seater sofa. Conversely, a traditional sofa is typically a larger three- to four-seat piece of furniture. Depending on a person’s needs, size of their family, and the size of their home, they may purchase either a loveseat or a sofa, or both together.

The average size of a loveseat ranges from 52’ to 64’ arm to arm. There are plenty of resources that detail standard sofa sizes and sofa weights you can also consult. Your manufacturer should have that information, though.

Brands that make the best loveseats

You have many options when it comes to loveseats. You can choose one with fabric upholstery or a leather loveseat. You can choose a firm cushion or plush. You can even choose whether your sofa is built with a metal frame or solid wood.

There are a number of excellent brands to choose from. If you’re in the market for a loveseat, check out our guide to the best loveseats on Home of Cozy.

Fall In Love With Our Top Rated Sofas & Couches 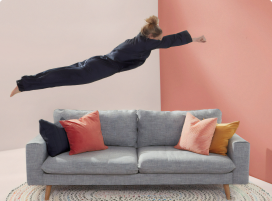